It cannot be denied that Bali is indeed a paradise for tourist attractions. Not only the beautiful beaches, or questions like which part of Bali has the best beaches? or other facts such as cultural tourism which turned out to anesthetize tourists to foreign countries, the typical culinary island of the Gods or what food is Bali famous for? also you can not just pass away, because Bali is also a paradise for most famous culinary in Indonesia.

Balinese cuisine has its own charm, because it is always blended with spices and spices that are strong and spicy. Generally, tourists know several types of Balinese culinary such as pork roll or only chicken. So what food is Bali famous for? can be answered, this article will mention a few of the foods that are popular in Bali.

The browned color of pork roll is really crispy on the tongue. The meat is so tender and rich in spices. Uniquely, even Balinese spices and vegetable cassava leaves are put into pork belly and rolled on hot coals. The Babi Guling menu is usually served with warm white rice with lawar, satay wrapped, and a small bowl of jukut ares.

What food is Bali famous for? One of them is unique and different from satay in general, which has skewered meat, this Satay is actually made by twisting. Previously, the meat will be finely chopped and mixed with Balinese herbs. Then, wrapped around the leaf stems of lemongrass or bamboo stalks. It feels guaranteed soft and savory!

Mix Rice or local language known with Nasi Campur is one of the most popular Balinese foods. For native Balinese, this is their daily food menu. Twisted satay, shredded chicken, Balep Genep Balinese seasoning, vegetable urap, and chicken lawar are ready to be eaten accompanying warm white rice. Eat Mixed Rice will be more delicious, when you mix it with sun sauce or Balinese embe sauce.

Lawar is a mixture of vegetables and minced meat that is specially formulated using Balinese spices. Indeed, Lawar is generally processed using a mixture of pork, but apparently duck entog (kuwir) is also an alternative meat favored by the people of Bali.

The shape of Tipat Blayag is not curled like a square diamond, but more like a rice cake wrapped around the length of a young palm or young palm leaves. Unlike cantok tipok which uses peanut sauce, Blayag as what food is Bali famous for? It has seasonings derived from processed rice flour and a mixture of Balinese spices.

Why is Bali called Bali? History of Bali 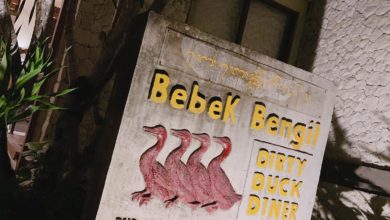 All You Need to Know About Bebek Bengil Ubud